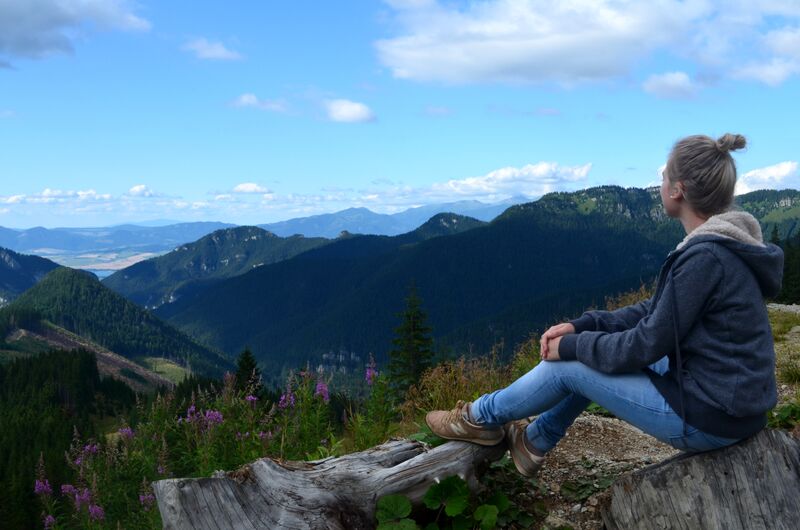 Inner Peace spreads to the mountains of Slovakia

Three stories of three young people (Evgenia from Russia, Carmen from Italy and Giorgos from Cyprus) who became interested in meditation during the training course “SUSTAINOFUTURELAND” in Demänovská Dolina, Slovakia.

Evgenia
A short, tiny blond-haired girl rushed to me at the airport of Bratislava, our meeting point before boarding the bus to the venue of a training course. She introduced herself as Evgenia from Russia and wanted to know also my name and country. Once she learnt it, she immediately asked me: “Do you know Masha?” I laughed at first, not believing that I would know a friend of hers, but seeing her persistence, it became more and more clear to me, that she had spotted me on purpose.
“I actually think, you may know her,” she said, ignoring my doubtful facial expression.
“Oh really? You mean Masha? Maria?”
“Yes, Maria from Moscow. I think you met in Thailand.”
“Oh, Maria!” I exclaimed and finally understood which person she was talking about. From that moment on, all doubts were cleared. Evgenia was a friend of Maria, and she had seen me in Maria’s photos after our Fellowship in Thailand. Moreover, Evgenia said she would like to learn about Peace Revolution and meditation. That was the moment when my heart filled with excitement. I realized that meditation had become my mission, no matter where I went and what I did. Moreover, meditation was me; my thoughts that I thought, my words that I spoke and my actions that I did.
“Sure, I can lead a session for the entire group,” I said enthusiastically to Evgenia.
She was happy to hear that, and by the time we had to board the bus, from strangers we had become friends. Evgenia had kindled a spark in me to be in the moment, for her and for others.

Future-landers
The training course “SUSTAINOFUTURELAND: create your future now” took place in Demänovská Dolina, the north part of Slovakia which is blessed with spectacular mountain views. It was a four hour journey by bus from Bratislava airport, until we – participants from Malta, Italy, Portugal, Russia, Cyprus, Romania, Bulgaria, Bosnia and Herzegovina, Latvia – reached a dense forest with only one hotel, located just by the mountains. The hotel seemed like a well-known place for locals and tourists to come for hiking in summers and skiing in winters. We did not get to see much of outside, since it was raining almost every day, but the feeling of being away from stressful life with problems was still present; those mountain peaks were still visible from the windows and the energy in the group was flowing persistently from the activities we did together.

I felt it already on the second day, that the group was open-minded and curious about each other; they liked to dwell on conversations, discover their potential for creativity and coaching and learn about meditation. In fact, when on the first day, we had to present our organizations, I decided very quickly that I would present Peace Revolution (since I did not know much about my official sending organization). I did it in an attractive way, focusing on person’s mind, stressful life in the times of technology, and meditation as the answer to all our questions. My presentation was welcomed with a huge interest, and after the session, even trainers came to me to confirm that I would really lead a meditation session in the free evening that was planned for additional activities. By the time I actually led the workshop, I had already become a “meditation girl”. People asked me questions about meditation, they wanted to know my experience, and I felt their excitement growing every day to try meditation by themselves.

Carmen
Carmen from Italy became one of them. Though she was one of my three room-mates, we had not really got an opportunity to talk, until that one evening when I was in the room, she was in the room, and I felt, this was the situation meant to be. It is usually at the beginning of a training course when you remember people by some phrase they have said or a hobby they share with you. Carmen was on my “to talk” list since the first day when she introduced herself as a journalist who quit her job and started travelling. Perhaps, the evening hour was not really the best time to speak about it. She had just taken a shower and was trying to find a hair-dryer. I was tired and about to go to bed. Yet, in order to stop the silence, I casually asked her: “So how do you manage after you quit your job?” I am not sure, if this was what interested me in that moment, but what definitely interested me was Carmen and starting a conversation with her. I felt that also she did not feel like speaking about her career while getting ready for the evening, but from her friendly reaction, I understood, that she too might have placed me on her “to talk” list. She started speaking briefly about her, that she would like to be free and independent to write whatever she wanted. We shared many common values. I too had been a journalist and similarly to her, left my job. She also asked me about meditation and my involvement in Peace Revolution. Our conversation was moving haphazardly, until suddenly she blurted out something that totally froze me. “Actually something bad happened in my life,” she said, “my mother died last year.” I could not believe, this cheerful, full-of-enthusiasm girl, always smiling and smiling even as she said that, was going through something like that. I felt sorry for her. I did not know what to say, but then as I felt I had to say something, all that came to my mind was: “I think, you should definitely try meditation.” Though this was never a case with me, for some reason, I mentioned to her that many people who have lost someone close, often start meditating. “Really? I am very curious,” she said, and we agreed, she would come to my session.

Having dried her long, wavy, brownish hair, Carmen left the room to hang out with others. I was too tired to join her, so I took a shower and went to bed thinking about the activities we had done during day. It was only then, that I remembered how we were asked to write a postcard to our mother (or a friend), using some random words and trying to be creative about inserting them in sentences. It was a fun activity: those who read their postcards aloud, mentioned to their mothers how they are spending time on a beach with Eric Clapton or having wild adventures with Jonny Depp. It all had naturally evoked laughs and smiles. But only at that moment, it came to my mind: how was Carmen feeling then? 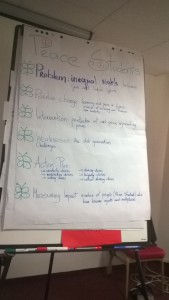 From the moment, I saw that sparkle in his eyes, I felt, that Giorgos from Cyprus was a well-mannered, easy-going and peaceful person. As soon as he learnt that I do meditation, he asked me nearly every day when I would finally lead a session. He had done it once, and he believed in the benefits of meditation. In one activity, I happened to be in the same working group with him. We had to propose a project that we would like to implement, and we decided to work on Giorgos’s idea about uniting Greek and Turkish Cypriots in Cyprus. Due to historical reasons, there are no equal rights for citizens of Cyprus, and that clearly creates a divide in the country. It was Giorgos’s idea to bring peace to the island through many activities; he decided to mention meditation as one of them. So, we wrote it in our project that we named Peace Students, and presented in the plenary. While the project is still in the process to be considered and implemented, Giorgos decided to begin with himself. After returning home from Slovakia, he started the 42-days self-development on Peace Revolution platform. 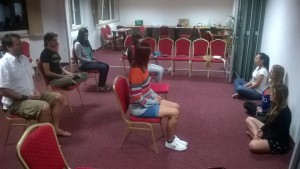 I think, my favourite moment is when I tell them: “Now you can gently open your eyes”. Not because I would like to finish the session, but because it is the moment of realizing that together we have achieved something within ourselves, and that something is now here in the room; it has filled the place with a totally different feeling. That something is peace we have cultivated inside and that has made us silent for a while, calm and content, and wondering about what just happened inside me. While some of my friends are still pondering about their inner experience, others resume talking, and I feel, that even our speech has become slower and more considerate. It was around 15 people in the first session and 7 people in the second session, and I am happy they have opened their eyes to a more peaceful future.